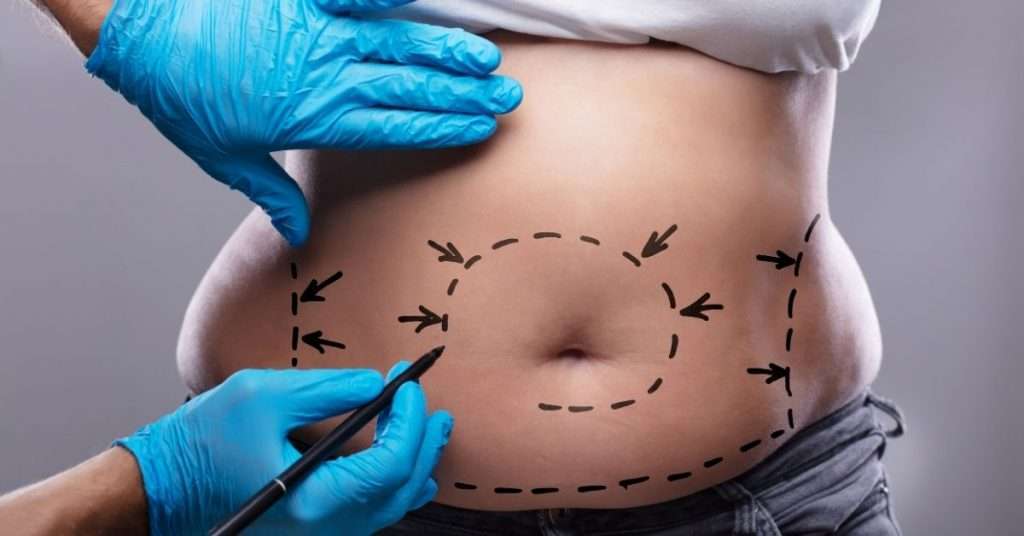 Liposuction slims and reshapes specific areas of the body to give a beautiful contour and proportion by removing excess resistant fat deposits.

Liposuction techniques may be used to reduce localized fat deposits of the:

Liposuction can be performed alone or along with other plastic surgery procedures, such as a facelift, breast reduction or a tummy tuck. Click here to read More about Liposuction.

Liposuction is one of the most commonly performed cosmetic procedures today in western world. Dermatologists now perform about one third of these procedures in the United States and have pioneered many of the advances in liposuction, especially in the fields of ambulatory surgery and local anaesthesia, to minimize pain and uncomfortableness caused to patients.

In Pakistan, in the past decade awareness about cosmetic surgery has increased dramatically. Globalization, improved affluence, access to information via internet and television, and a high degree of awareness about health and beauty have all led to an increasing demand for aesthetic procedures. An increasing number of dermatologists are now performing aesthetic procedures, but to choose a qualified dermatologist / cosmetic surgeon is necessary.

What Liposuction won’t do?

Liposuction is not a treatment for obesity or a substitute for proper diet and exercise.
It is also not an effective treatment for cellulite – the dimpled skin that typically appears on the thighs, hips, and buttocks – or loose saggy skin.

Subcutaneous fat is arranged in the form of lobules separated from each other by septae. The fibrous septae consist of blood vessels, nerves, and lymphatics. Each lobule consists of fat cells, which consist mostly of triglycerides and fill up the cell almost entirely, pushing the nucleus to one side. It has been shown that during initial weight gain in any person, there is an increase in the size of the fat cell. With continued weight gain, there is, a subsequent increase in the number of fat cells, as mesenchymal stem cells get converted to fat cells.

What is “Resistant fat”?

Diet and exercise have been shown to decrease the fat cell size, but not the fat cell number, which is referred to as “resistant fat”.

How to get rid of “Resistant fat”?

1. Removal of fat cells during suction.

2. Damaging the fat cells by the to-and-fro motion of the cannula. These remaining damaged fat cells get absorbed slowly over the period of time, generally in 6–12 weeks and hence, the final result after liposuction is more pronounced after 6–12 weeks, a fact which needs to be emphasised during counselling.

Liposuction was initially developed in the late 70’s in Italy and France. At that time, liposuction was performed under general anaesthesia without any introduction of fluid, hence, called “dry liposuction”. Later, a “wet technique” was developed that involved introduction of a small amount of fluid into the fat. Both of these methods were associated with much blood loss, and patients frequently required blood transfusions.

In 1985, Dr. Jeffrey A. Klein, a dermatologist in California, revolutionised liposuction surgery with the introduction of “Tumescent Technique”, which permits liposuction totally by local anaesthesia and with minimal surgical blood loss. Further modifications such as power liposuction and ultrasonic liposuction have been introduced with variable results. Despite these advances, the tumescent technique remains the worldwide standard of care for liposuction.

How much fat can be reduced in one procedure?

Several factors limit the amount of fat that can be removed safely in one session without adverse effects. Ultimately, the operating physician and the patient make the decision. There are negative aspects to removing too much fat. Unusual “lumpiness” and/or “dents” in the skin can result in those patients “over-suctioned”. The more fat removed, the higher the surgical risk.

To be a good candidate, one must usually be over 18 and in good general health, have an ongoing diet and exercise regimen, and have fatty pockets of tissue available in certain body areas.

Significant disease limiting risk (e.g. diabetes, any infection, heart or circulation problems) weigh against the eligibility of a person for the procedure.

In older people, the skin is usually less elastic, limiting the ability of the skin to readily tighten around the new shape.

The basic surgical challenge of any liposuction procedure is:

In “Tumescent Liposuction” a large volume of very dilute lidocaine (local anesthetic) and epinephrine (capillary constrictor) is injected into subcutaneous fat, and the targeted tissue becomes swollen and firm, or tumescent.

The tumescent liposuction technique eliminates both the need for general anesthesia and need for IV narcotics and sedatives.

The tumescent technique for liposuction:

1) Provides local anesthesia,
2) Constricts capillaries and prevents surgical blood loss.
3) Provides fluid to the body by subcutaneous injection so that no IV fluids are needed.

How the Tumescent Liposuction reduces the blood loss and eliminates the need of blood transfusion during the procedures?

Tumescent infiltration of a large volume of dilute epinephrine into subcutaneous fat causes profound vasoconstriction (shrinkage of capillary blood vessels). Tumescent vasoconstriction is so complete that liposuction can be done with virtually no blood loss. In contrast, the older forms of liposuction used before the invention of the tumescent technique were associated with so much surgical blood loss that autologous blood transfusions were often routine.

Because the vasoconstriction delays lidocaine absorption, the local anesthetic remains in place in the fat for many hours. This prolonged anesthesia permits surgery for up to 10 hours after infiltration, and provides 24 to 36 hours of significant postoperative analgesia.

Why we use microcannulas?

A liposuction cannula is a stainless steel tube which is inserted into subcutaneous fat through a small opening or incision in the skin.

The use of larger cannulas, for example those having an outside diameter ranging from 3 mm to 6 mm require larger incisions which usually leave visible scars.

Adits are small holes in the skin made with round, skin-biopsy punches.

Adits are used as access sites, in which the liposuction cannula is passed in and out of during the liposuction process. Adits also facilitate the drainage of blood-tinged anesthetic solution after liposuction.

Because of the skin’s ability to stretch, microcannulas can usually fit through a 1.0 mm, 1.5 mm, or 2 mm round hole made in the skin with a skin biopsy punch. Such tiny holes usually disappear without scars after liposuction. Adits are so small that it is not necessary to close them with sutures. Because adits are not closed with sutures, they promote copious postoperative drainage of blood-tinged tumescent anesthesia, which in turn reduces post-operative bruising, tenderness and swelling.

How the microcannulas help in getting smoother liposuction results?

Microcannulas allow a more gradual and controlled removal of fat thus leading to smoother liposuction results. This improves the ability of the surgeon to achieve smoother results.

Larger cannulas are associated with an increased risk of liposuction causing skin depressions and irregularities. Larger cannulas may remove fat so quickly that there is a risk of removing too much fat. It is also more difficult to precisely control the direction of a large cannula. With any attempt to make a small incremental change in the direction of a large cannula there is tendency to re-enter a pre-existing tunnel within the fat. This lack of precise control contributes to the risk of skin irregularities associated with liposuction when using large cannulas.

What are the other advantages of Tumescent Liposuction?

1-Tumescent liposuction is less painful and more pleasant than liposuction under general anesthesia or IV sedation.

2-With tumescent local anesthesia, patients are able to avoid the post-operative nausea and vomiting associated with general anesthesia.

3-Tumescent anesthesia is so efficient at providing fluid to the body that it is unnecessary to use IV fluids.

Before receiving any of the procedures, no anticoagulants should be taken for two weeks before the surgery.

Fig. 1. Principle of liposuction; fat before and after tumescence, and after aspiration

445 G 4 Block Main Boulevard Near Khokhar Chowk Johar Town Lahore Pakistan
2004-2022 All Rights Are Reserved © cosmetique.com.pk
We use cookies on our website to give you the most relevant experience by remembering your preferences and repeat visits. By clicking “Accept All”, you consent to the use of ALL the cookies. However, you may visit "Cookie Settings" to provide a controlled consent.
Cookie SettingsAccept All
Manage consent

This website uses cookies to improve your experience while you navigate through the website. Out of these, the cookies that are categorized as necessary are stored on your browser as they are essential for the working of basic functionalities of the website. We also use third-party cookies that help us analyze and understand how you use this website. These cookies will be stored in your browser only with your consent. You also have the option to opt-out of these cookies. But opting out of some of these cookies may affect your browsing experience.
Necessary Always Enabled
Necessary cookies are absolutely essential for the website to function properly. These cookies ensure basic functionalities and security features of the website, anonymously.
Functional
Functional cookies help to perform certain functionalities like sharing the content of the website on social media platforms, collect feedbacks, and other third-party features.
Performance
Performance cookies are used to understand and analyze the key performance indexes of the website which helps in delivering a better user experience for the visitors.
Analytics
Analytical cookies are used to understand how visitors interact with the website. These cookies help provide information on metrics the number of visitors, bounce rate, traffic source, etc.
Advertisement
Advertisement cookies are used to provide visitors with relevant ads and marketing campaigns. These cookies track visitors across websites and collect information to provide customized ads.
Others
Other uncategorized cookies are those that are being analyzed and have not been classified into a category as yet.
SAVE & ACCEPT