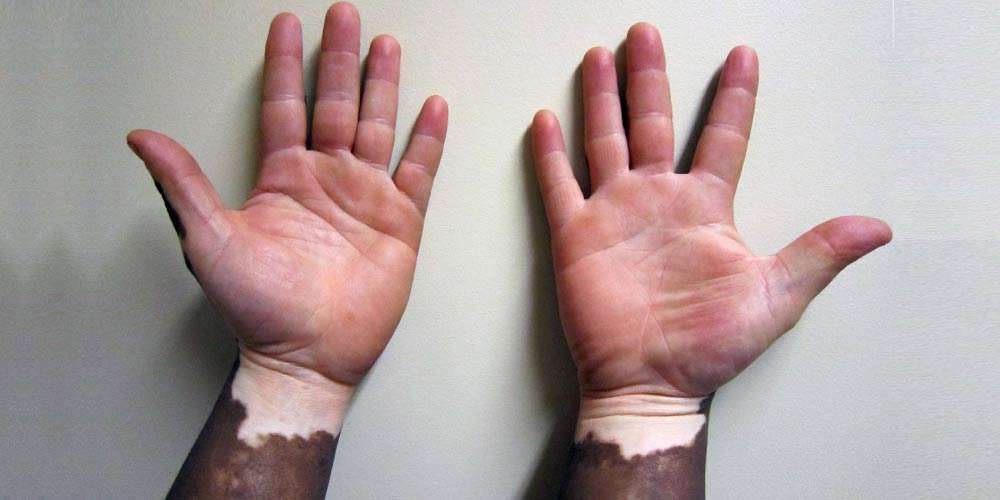 Vitiligo is a skin disease in which small patches of skin lose their color, and somehow it is a long-term, incurable skin disorder. Its reason is known chiefly; however, a genetic link seems more likely. It is neither an infectious nor a transmittable disease. Moreover, it can affect people of any age, gender, and background. Its significant symptoms include white, silvery patches on the skin, making it discolored from that area.

Vitiligo is commonly called (Phul- Behri) or Leukoderma in the sub-continent region. In this disease, skin color is permanently lost from a small or large portion of skin. The areas which are most commonly affected by this disease are given as follows:

It means it can happen in any part of the body.

In whom does Vitiligo occur?

Usually, its victims are children and adults who are less than 20 years of age. Also, about 90% of cases occur in people before 40 years of age.

Scientific research proved that when the immune system, which protects us from germs and infections, gets hyper-activated, it starts to attack the body’s normal cells instead of attacking foreign elements like germs. In the disease of Vitiligo, the body’s immune system starts to attack Melanocytes. These are the cells that are responsible for color in the skin. So, when these cells are killed, the results are white or colorless spots of Vitiligo.

What happens in Vitiligo?

It is a skin disease in which skin loses its color, and as a result, white patches are formed on the skin. Moreover, in the areas with hair like the scalp, where Vitiligo appears, the hair may also turn white. Vitiligo occurs when cells that produce Melanin, a particular chemical, are destroyed by the body’s immune system. It is the damage of Melanin that gives skin white color. There are many reasons for the deterioration of melanin-producing cells like;

Furthermore, Vitiligo can happen at all ages, but most chances are before 20. It is not a transmittable disease. Instead, it is a cosmetic concern disease. The white patches remain the same for years or spread quickly on other body parts. However, in general, it is a rare disease but is present in all races and genders worldwide, especially it is more visible in people with darker skin.

Vitiligo signs can be shown on any part of the body. Its significant symptoms include the following:

Vitiligo itself is not a life-threatening disease, but it can make anyone conscious of its personality and physical looks. Unfortunately, Vitiligo cannot be cured, but numerous treatments can stop it from spreading further to other parts of the body. Most of those treatments also somehow help in restoring your original skin color.

A few types of available Vitiligo Treatment in Lahore, Pakistan are as follows:

Doctors suggest different types of creams and lotions for the affected area. If the area is small and the disease is relatively new, then in most cases, these lotions and creams may prove effective to some extent.

This method uses a special kind of light with a definite wavelength and frequency to treat the patient’s affected area. The patient is given timed and controlled exposure to this light in a special chamber. At Cosmetique clinic, our machinery is from USA’s finest brand, which we are using for PUVA and Narrow Band UVB. This treatment is given to those patients whose area of Vitiligo is too large to be handled with creams and lotions. Also, it is for those patients who have failed to regenerate the original color in the treated area. That is the latest therapy applied globally, which is now successfully available in our Cosmetique clinic in Lahore, Pakistan as well.

That includes three types of surgical Vitiligo Treatment in Lahore, Pakistan. They are explained as follows:

That is an old method in which white skin of diseased area is removed, and in its place, a small piece of normal skin is transferred. This process leaves a scar of the same size as that of Vitiligo. That is why the best dermatologists in Lahore, Pakistan, usually do not recommend this type of treatment as the patient’s botheration about his look still remains.

That is also an old method but is better than skin grafting. In this method, less than a cm of circles of normal skin are taken and then transferred to the Vitiligo struck spot of the patient’s skin. The skin color then returns to normal, but some uneven small bumps remain after this grafting.

It is the most advanced and latest method of Vitiligo Treatment in Lahore, Pakistan. During this process, cells that make color (Melanocytes) are shifted from normal skin to the diseased part of the skin. Once this transfer has occurred, these cells start making a color in the white affected area. Generally, it is the most satisfying method for patients as it does not leave any scars on their bodies.

However, it is also problematic for surgeons to learn and perform. But at Cosmetique clinic, we proudly say that our well-known Dr. Azim Jahangir Khan is the only best dermatologist /cosmetic surgeon in Lahore, Pakistan, trained and properly licensed to perform this surgical technique.

How long does the surgery take to perform?

It usually takes 2-3 hours to perform this Vitiligo Treatment in Lahore, Pakistan.

What happens after surgery?

It is a time taken procedure. The patient usually gets bandaged on the donor area and also on the recipient area. Later, those bandages are removed after about ten days. A patient can do his daily routine work in a couple of days.

When does the color start to appear in the Vitiligo area?

Mostly it takes about 3 to 6 months for the color to appear in the melanocyte transplanted area of the patient.

How long does it take to see the full results?

It takes some time for the cells to make the color. Mostly it may take six months to a year for the cells to spread the color to the whole treated area. But that is just a rough idea; the results vary from patient to patient according to the skin and his affected area.

When can the surgery be considered?

When any patient’s Vitiligo has not changed over six months to one year after all medical treatments or phototherapy, the best dermatologists in Lahore, Pakistan, then suggest surgical treatment.

While, if someone has only a few small areas of Vitiligo and no new ones have developed in the last one or two years, then surgical treatments will give the best and complete acceptable results with patient satisfaction.

However, with the help of Melanocyte transplant, small areas which are also not increasing in size are the most successfully treatable areas of patients.

How much does the surgery cost?

The cost of Vitiligo Treatment in Lahore, Pakistan, mainly depends on the size of the area affected by this skin disorder. Its price generally starts from 40,000 Rs and onwards. If you need to know the actual cost of surgery, then you should consult the best skin specialists of Lahore, Pakistan, serving at the Cosmetique clinic.

Where to get the best vitiligo treatment in Lahore, Pakistan?

To get the most reliable treatment of Vitiligo, you need not worry anymore. Just call Cosmetique Clinic Helpline 03-111-077-111, and get the solutions to all your skin problems. For vitiligo treatment, please call or e-mail your photographs along with your biodata to our health consultants for more guidance. After a proper check-up, our best dermatologists in Lahore, Pakistan, will guide the most suitable treatment options according to your skin condition.

445 G 4 Block Main Boulevard Near Khokhar Chowk Johar Town Lahore Pakistan
2004-2023 All Rights Are Reserved © cosmetique.com.pk
We use cookies on our website to give you the most relevant experience by remembering your preferences and repeat visits. By clicking “Accept All”, you consent to the use of ALL the cookies. However, you may visit "Cookie Settings" to provide a controlled consent.
Cookie SettingsAccept All
Manage consent

This website uses cookies to improve your experience while you navigate through the website. Out of these, the cookies that are categorized as necessary are stored on your browser as they are essential for the working of basic functionalities of the website. We also use third-party cookies that help us analyze and understand how you use this website. These cookies will be stored in your browser only with your consent. You also have the option to opt-out of these cookies. But opting out of some of these cookies may affect your browsing experience.
Necessary Always Enabled
Necessary cookies are absolutely essential for the website to function properly. These cookies ensure basic functionalities and security features of the website, anonymously.
Functional
Functional cookies help to perform certain functionalities like sharing the content of the website on social media platforms, collect feedbacks, and other third-party features.
Performance
Performance cookies are used to understand and analyze the key performance indexes of the website which helps in delivering a better user experience for the visitors.
Analytics
Analytical cookies are used to understand how visitors interact with the website. These cookies help provide information on metrics the number of visitors, bounce rate, traffic source, etc.
Advertisement
Advertisement cookies are used to provide visitors with relevant ads and marketing campaigns. These cookies track visitors across websites and collect information to provide customized ads.
Others
Other uncategorized cookies are those that are being analyzed and have not been classified into a category as yet.
SAVE & ACCEPT